Belated Anniversary Wishes : What to write on belated anniversary wishes? We understand that when you forget the anniversary of your close ones, what the situation is! If your consequence other doesn’t have good forgiving characteristic then our belated anniversary messages going to help you out. It is quite obvious that your dearest and nearest ones expect that you will wish them first. But, what to do when you have made the anniversary wishing belated? No offense, we have arranged marriage anniversary, wishes for the late card, apology, best wishes that would work for restoration like magic. We have picked both the sincere and funny categories. Now it’s up to you which one will suit your situation and specific one.

Hope your life will freshen like newfangled dewdrops and have all the joy at heart’s content. Happy Belated Marriage Anniversary!

Apology for late wishing! Marriage is a beautiful thing, cause it brings two imperfect people into one machine and makes them both perfect when they are together.

Our marriage is a great success, as you have made me so perfect and complete with all of your love. Hope you don’t mind at belated wishing!

You both make a nice couple together and my warm wishes will be with you always. Congratulations on your belated 1st Marriage Anniversary! Please grant my apology for being late at wishing you. May God bless you both with endless love and togetherness forever!

I am really sorry for forgetting this special occasion. Let’s make our marriage more beautiful by taking the oath of loving and having faith in each other forever.

Whenever I see you, two wonderful people, I realize that marriages are made in heaven. Happy belated marriage anniversary!

Grant my apology for wishing a bit late! May God fill your life with endless joy and boundless love!

Being married is almost like you are in a battlefield. So be prepared always for the war. Accept my tardy anniversary wishes!

How can I forget the historic day of our life? It is a matter of observation that we have tolerated each other for so many years! Happy Anniversary.

There is only one difference between marriage and war which is you can sleep with your enemy in marriage. Wish you a belated battling marriage!

I may forget our anniversary but won’t stop annoying you ever, as it has been the most enjoyable for me all these years.

Forgetting this special date is not fair. It is great that we have come over another year without making one of us murdered! Let’s celebrate this.

Make your marriage a succeeded one by appreciating whatever your wife does and say “yes” to whatever she says. Best of luck on your belated anniversary, Dear!

Grant my apology for wishing late, but it is never too late to wish you a flourish, joyous and romantic marriage anniversary!

Though I am late, my greetings are as fresh as flowers. May God bless you with another lovely married year!

I wish all your yesterday’s plans and tomorrow’s desires come true. Congratulations on your another prosperous belated marriage anniversary. 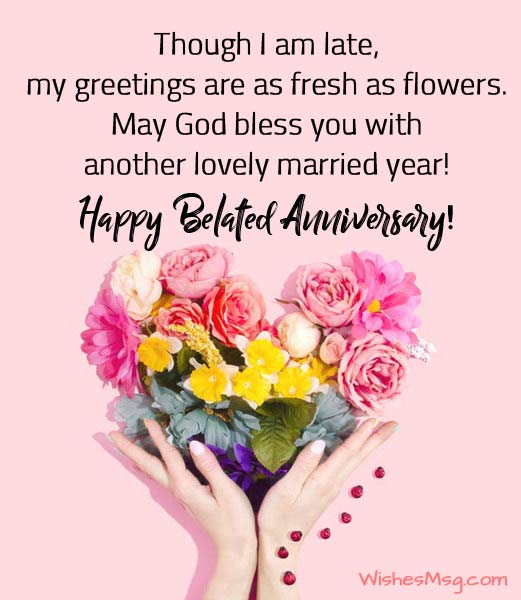 Take my hearty apology for wishing you late, my best friend. May your love and respect for each other grow stronger as your life’s pathway passes bye!

How stupid I am to forget our anniversary! I am so lucky that my best friend is my life partner. Always remain the same as now!

How insincere to forget your marriage anniversary! May God give you strength to your marriage to overcome all the challenges in your life and be happy always!

Forgetting your anniversary doesn’t prove I don’t care for you. No wonder you two are made for each other and congratulations on making an example of togetherness.

It is really not good to forget your special date. Mom and Dad, we are really inspired by you both and your togetherness is a milestone in our lives.

We may forget your anniversary but not your love. Best wishes to our legends. Thanks for being together and bringing me as your child. Never thank you enough!

Belated wishing for you both. Thanks for making sacrifices for us through your life and sorry for losing your romantic moments while you were busy doing good for us!

It is very sad to forget the anniversary of two adorable persons! There is love in your eyes, even when you two are quarreling with each other.

Mom and Dad, Sorry for late wishing and Congratulations on your golden jubilee and May God keeps you both together the whole life!

Check This : Anniversary Wishes For Parents

Belated Anniversary Wishes For A Couple

Through my belated wishes, let me pray for happiness, joy and more love for the sweetest couple I have ever met!

Accept my apology for belated wishes and let the magic of love spark in your relationship and end up creating an amazing bond of relationship!

Let your marriage life play the song of heavenly love through all the years of your life! Happy Belated Anniversary. Wishing is never too late, as love is hidden there. Wish you another cheering year with your beloved partner.

Through my belated wishes, I would like to know my evergreen wishes that come packed with a lot of good lucks on another year of your marriage!

Belated Anniversary Wishes and Messages for Late Greetings that you can send with a belated anniversary card, email, in a text or inbox message on Facebook. And, don’t forget to say sorry for the belated wedding anniversary wishes.